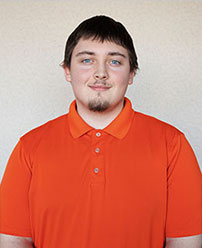 Raised in Toledo, OH, Joshua is currently a third-year student in the Computer Science and Engineering Technology program at The University of Toledo, with plans to graduate in December 2023. He is a 2019 graduate of Whitmer High School, where he was a member of the National Honor and National Technical Honor Societies and earned the rank of Eagle Scout in the Boy Scouts of America. His high school curriculum included some programming and civil engineering classes as well as a two-year career preparation program where he intensely studied computer networking. After falling in love with computers and with a desire to learn more, he enrolled at The University of Toledo College of Engineering to study Computer Science and Engineering Technology. In his five semesters of academic work, he has earned a place on the President’s List once and the Dean’s List twice. He is participating in the optional co-op program, with the first two of his co-op placements at GUT Consulting LLC. where he is a member of the IT support team.